Skip to main content
You are here:
Local Trostberg

“Donating instead of giving" has been the Christmas motto at Hamburger Containerboard in Trostberg for many years. This year, two regional charitable associations were supported in equal parts: "Faraja heißt Trost" and the "Kinderkrebshilfe BALU". 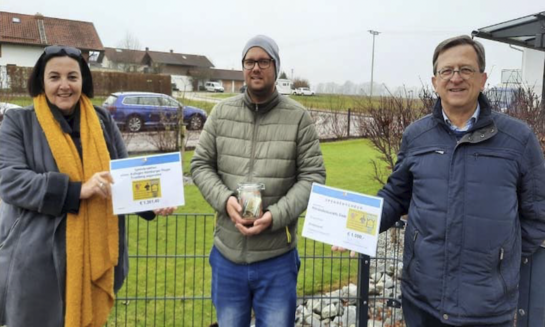 The Trostberg couple Marianne and Reinhard Penn founded the support association "Faraja heißt Trost" in 2009. This association cares for around 60 physically impaired children and young people in five schools in Tanzania and Kenya and provides them with educational and career opportunities. In the early days the focus was on educating the children. Now an additional challenge has been added to enable these young people to do things that secure their existence, such as planting vegetable gardens and keeping their own farm animals (like chickens and pigs), reports Marianne Penn. Managing Director Klaus H. L. Müller handed over the symbolic donation check to Marianne and Reinhard Penn.

The second donation was given to "Kinderkrebshilfe BALU". A former colleague, who has been suffering from an inoperable brain tumor since 2016, has been doing exemplary work for this community for years.  “Kinderkrebshilfe BALU” cares for families of cancer patients. The 32-year-old family man sets up a donation box in a different store every month and ensures the necessary and well-deserved attention with selfmade handicrafts and inventive video clips. This year his campaign was themed "Wunschbrunnen 2021” (wishing well). The management board immediately agreed to support his campaign. An additional donation appeal initiated by colleagues further increased the “Wunschbrunnen” account balance. Both contributions were handed over to the fundraiser and former colleague Christian Zwirglmaier by Managing Director Georg Voit and Gisela Gehrmann.