On August 30th, the completion of the structural work at the building site of Hamburger Containerboard’s paper machine 2 in Spremberg was celebrated. 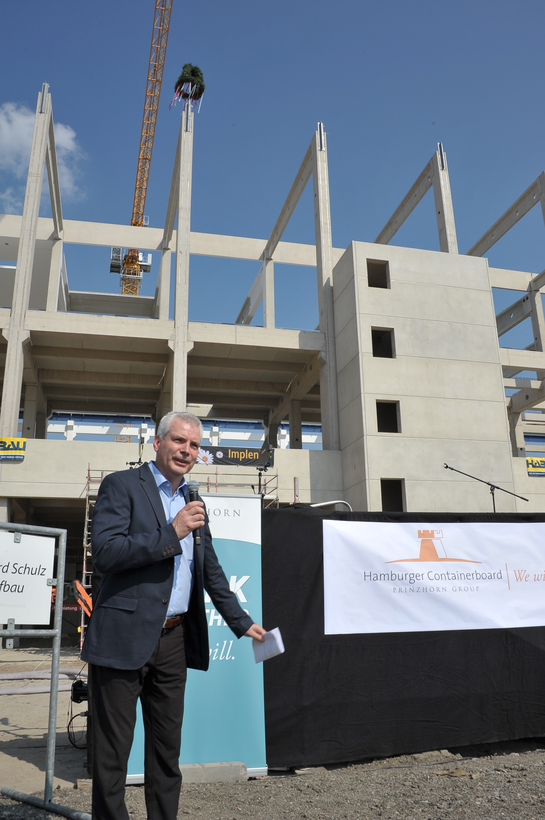 Participating guests included, among others, Dr. Klaus-Peter Schulze, member of the German Bundestag, deputy mayor of the administrative district of Spree-Neiße Olaf Lalk as well as the mayors of Spremberg and Spreetal Christine Herntier and Manfred Heine, respectively.

Dr. Klaus-Peter Schulze said: “To this day, the Hamburger Group has honoured all its commitments, has created jobs with great promise for the future, and has proved to be a reliable partner for the region.”

Managing director of the Hamburger Containerboard, Harald Ganster, thanked the construction workers for their high-quality labour: “With this investment, we are pleased to have set a milestone not only for our group strategy, but also for the region of Lausitz as a whole. This investment confirms our trust in the locally responsible players, as well as in our employees, who for the large part have accompanied us throughout 15 years in the region. With this step, the number of direct employees of all Prinzhorn companies active in this area will thus increase to 700.”

Since September 2018, the working group of the construction companies Implenia and Habau has been collaborating with numerous subcontractors on the building site. For the construction of the 400 metre-long complex formed by the paper machine hall, as the key component of the investment, 5,500 tonnes of structural steel were integrated on site, and 2,700 precast concrete elements were incorporated for the reinforced concrete frame. With an investment volume of 370 million euros, Hamburger Containerboard is expanding its production site at the Schwarze Pumpe industrial estate to become one of the most modern and efficient paper factories in Europe. At full capacity utilisation of the plant, 500,000 tonnes of high-quality white and brown packaging paper are manufactured each year.

The paper mill at the Spremberg location is part of the Hamburger Containerboard Division within the Austrian Prinzhorn Group. Its product lines RiegerLiner, RiegerTop and SpreeWhite make the company the market leader in the segment of white coated and uncoated testliner. With 2.47 million tonnes and ten plants, Hamburger Containerboard ranks among Europe’s leading manufacturers of premium corrugated base paper.

With its 9,800 employees in 16 countries, the Prinzhorn Group is a European market leader in the recycling, paper and packaging industry. An annual turnover of some 1.9 billion euros earns the enterprise third place in Europe in this segment. The family company has its headquarters in Vienna (Austria) and is organised into three divisions: Dunapack Packaging (packaging solutions made of corrugated board), Hamburger Containerboard (production of corrugated base paper) and Hamburger Recycling (collection and trade of secondary raw materials).